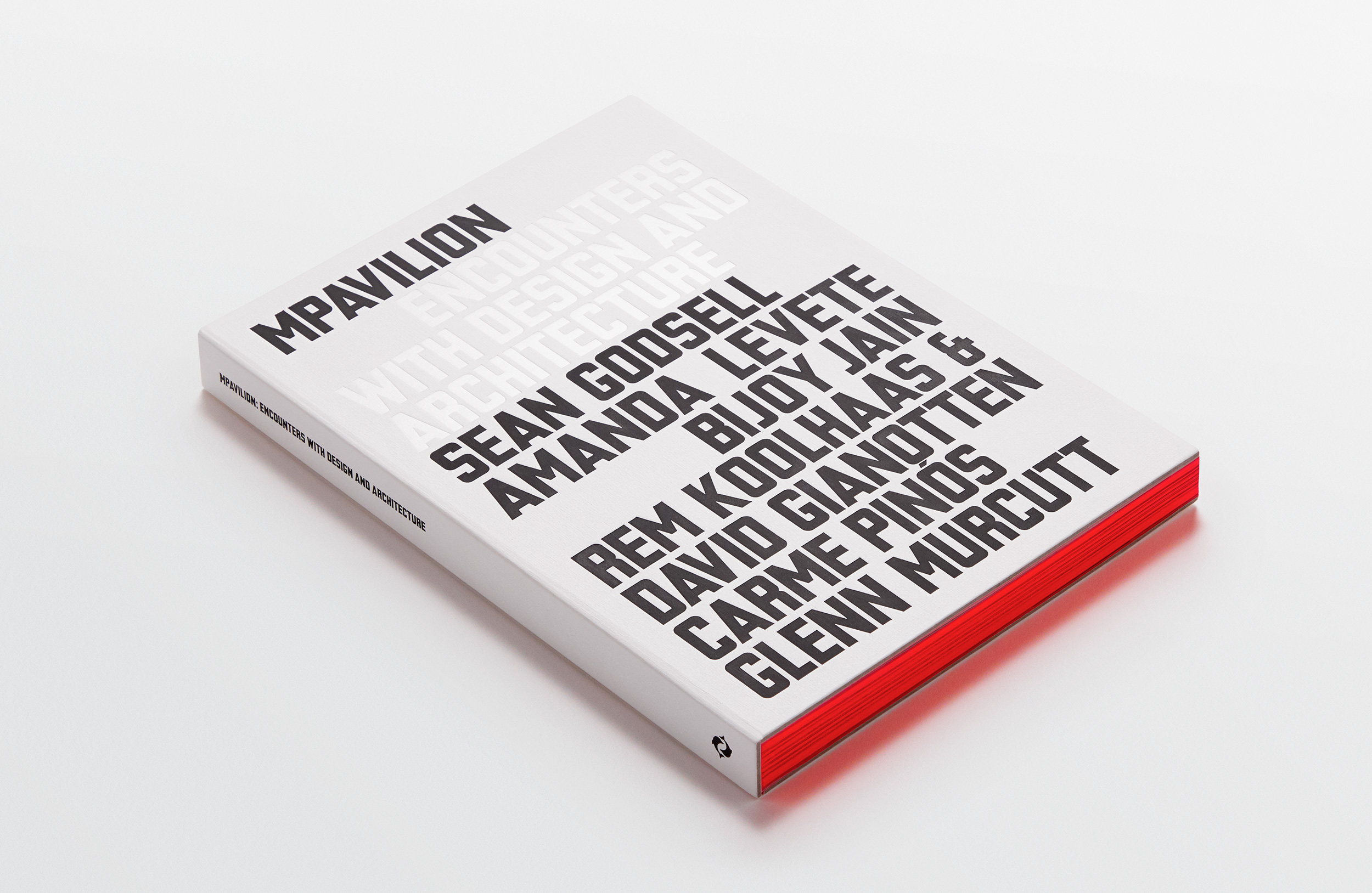 MPavilion’s new book, MPavilion: Encounters with Architecture and Design marks the completion of six remarkable years and is a celebration of what MPavilion has collectively achieved. Designed and art directed by Studio Ongarato and published by Thames & Hudson, the richly detailed monograph explores each architect’s contribution from 2014 to 2019 by Sean Godsell, Amanda Levete, Bijoy Jain, Rem Koolhaas, David Gianotten, Carme Pinós, and Glenn Murcutt.

Marking Studio Ongarato’s seventh consecutive year of working together with MPavilion and the Naomi Milgrom Foundation, Creative Director Fabio Ongarato talked to MPavilion about this very special partnership and what brands and cities can do to adapt to a post-Covid world.

MPavilion: How wonderful it’s been to work with Studio Ongarato for six years, Fabio. From the beginning, you and your team have crafted what has now become the very iconic visual identity of MPavilion. What have been your guiding stars in realising the MPavilion ‘look’?

Fabio Ongarato: Naomi Milgrom had a clear vision from the beginning of it being not only a celebration of the architect and architecture, but very much about it being an active, public place for all Melburnians to enjoy. The name MPavilion was born from this, with the idea of the Pavilion being ‘a container of many ideas’ combined with the M from Melbourne. This concept, and the interconnection of design and contemporary culture, was woven through the visual identity, design philosophy and the ongoing public programming of the project.

Our long-standing partnership with the Naomi Milgrom Foundation has seen the studio develop the project since inception. We had the great privilege of creating the identity for MPavilion’s inaugural launch in 2014, creating a series of brand images along with a custom typeface to communicate the concept of ‘a receptacle of many things’: ideas, people, events, collaborations.

The studio has been creative partners with the Foundation on the MPavilion graphic design every year from 2014, taking inspiration from the architectural style of the temporary pavilion developed each year by the commissioned architect (Sean Godsell, Amanda Levete, Bijoy Jain, Rem Koolhaas & David Gianotten, Carme Pinós and Glenn Murcutt). 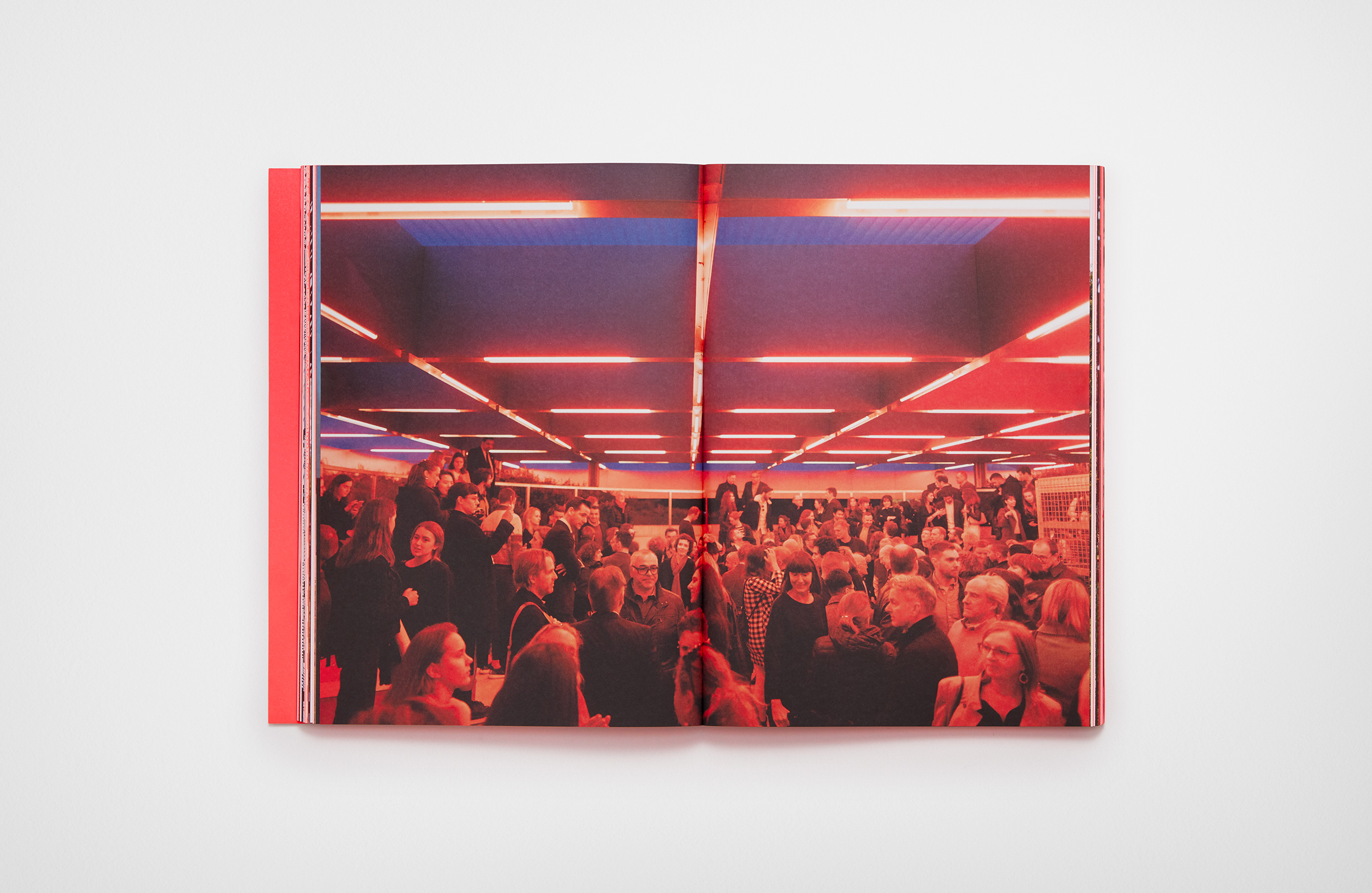 MPavilion: As a special extension of Studio Ongarato’s work with MPavilion, what did the MPavilion book need to achieve?

Fabio Ongarato: It was important the MPavilion book was about more than just the architecture and architects—it needed to recognise and reflect the community influence of the project. There was a sentiment of ‘for people, by people’, and we wanted to include the far-reaching effects of collaboration across the programming over the years along with the diverse audiences that it has attracted.

The book is a repository of this, reflecting the many contributors that helped shape MPavilion (like the varying essays and texts responding to each year/pavilion) and the photo essays. The idea of the title was born from this (Encounters).

We suggested Simon Terill (an artist dealing with architecture, place and people) to capture the second life of the pavilions once they were gifted to the City of Melbourne by the Foundation. This provided a more interpretive perspective, different to the architectural representation elsewhere. The post-life is complemented with the ‘pre’ life, where the gardens are included as another essay.

We also wanted to focus on the creation of each MPavilion, with photographic and essay features on each architect, and their pavilion itself. This documentation gives readers an evocative timeline of the architectural designs, as well as the activations of space that have happened every year since 2014. 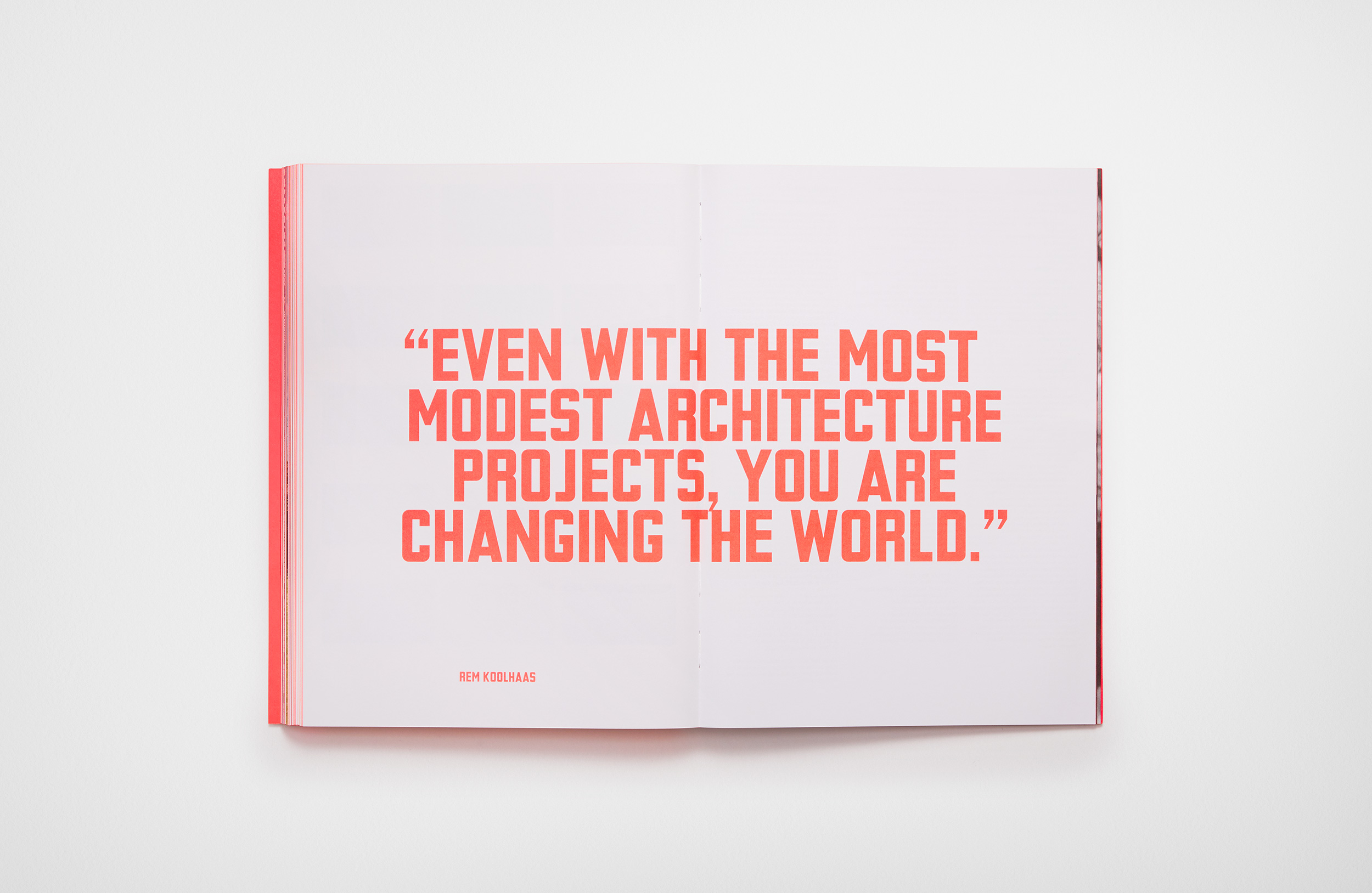 MPavilion: Can you talk us through the book’s key design elements?

Fabio Ongarato: The book is designed as a detailed monograph, collating each commissioned architect’s designs and essays alongside contributions from many MPavilion collaborators. The publication draws on the MPavilion brand identity, typeface and language with the signature MPavilion coral colour, which is a unifying motif across the fore edge of the book and throughout.

Each season, the graphic identity is evolved in response to the architect and the pavilion. These graphic elements define each season’s architect and photo essays alongside. It’s a very layered book, with many parts. The simple cover contrasts with the rich and diverse contents, mirroring the ‘container of ideas’ concept of the project and identity. 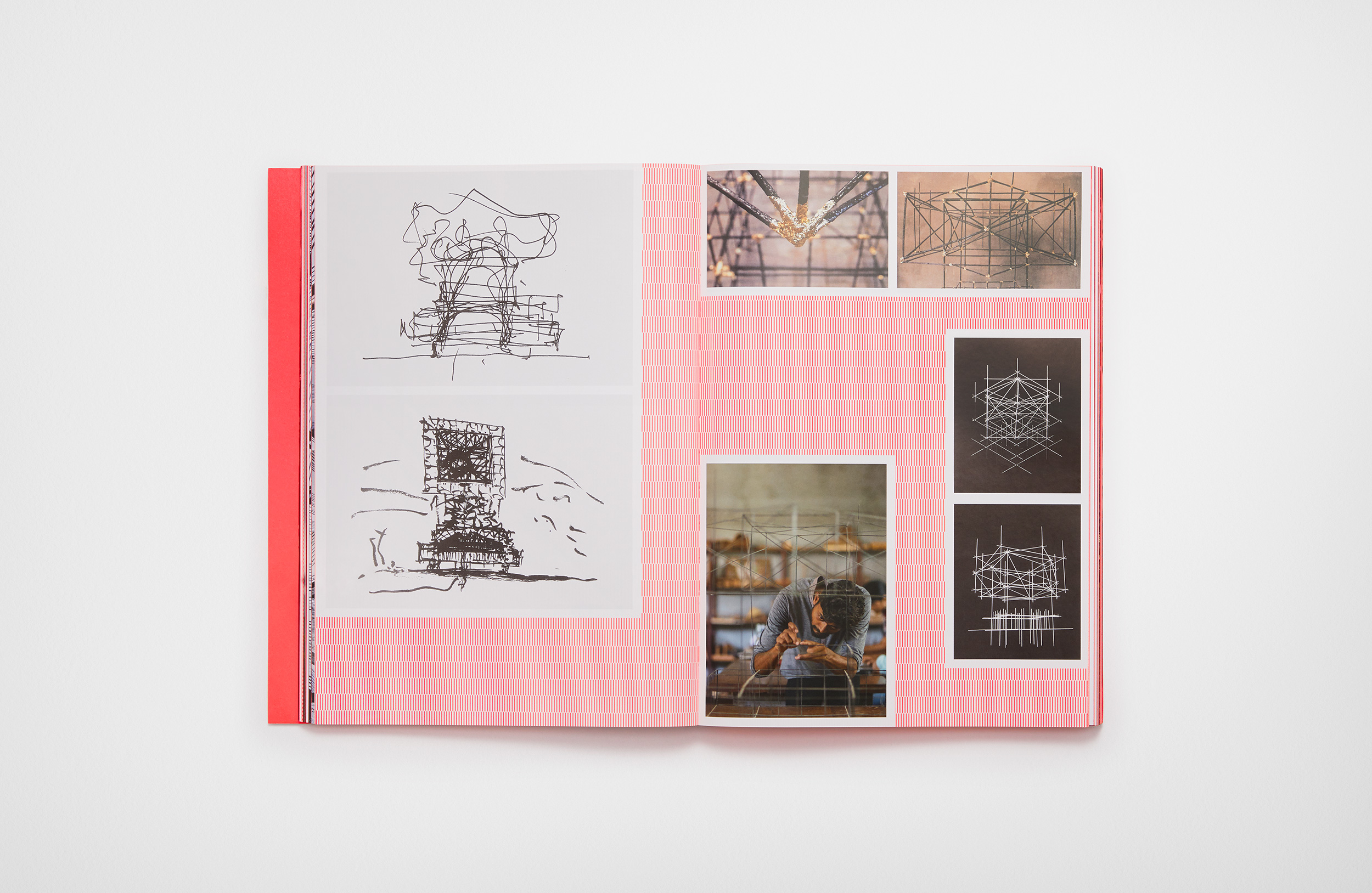 MPavilion: As a leading figure in Melbourne’s graphic design industry, do you have any insights or advice to share with individuals or studios that are seeking to adapt their practices in a Covid—and post-Covid—world?

Fabio Ongarato: The increasing textural density of our cities – Melbourne’s CBD recently surpassed Manhattan on population density – creates the preconditions for brands looking to interact with communities in the public space. However, Covid has struck the core of what makes cities such as Melbourne vibrant and highly liveable, dispersing people to their homes and discouraging cultural and social engagement.

As we look ahead to a post-Covid world, there will be an even stronger appetite for good design and cultural spaces as people look to reconnect locally in a more meaningful way. While consumers are now more attuned, and resistant to overt advertising, they will continue to be hungry for authentic brands and experiences that shift their perspectives or offer them something genuinely enriching. Those cities that are able to reignite their cultural identities and public spaces will remain invaluable as places where people can build networks, connect and collaborate. MPavilion will play an even more vital role in the reestablishment of those cultural and social connections.

MPavilion: Encounters with Design and Architecture (published by Thames & Hudson) is available for purchase through the Naomi Milgrom Foundation website.

Experiential art: the rise of culture and life in design